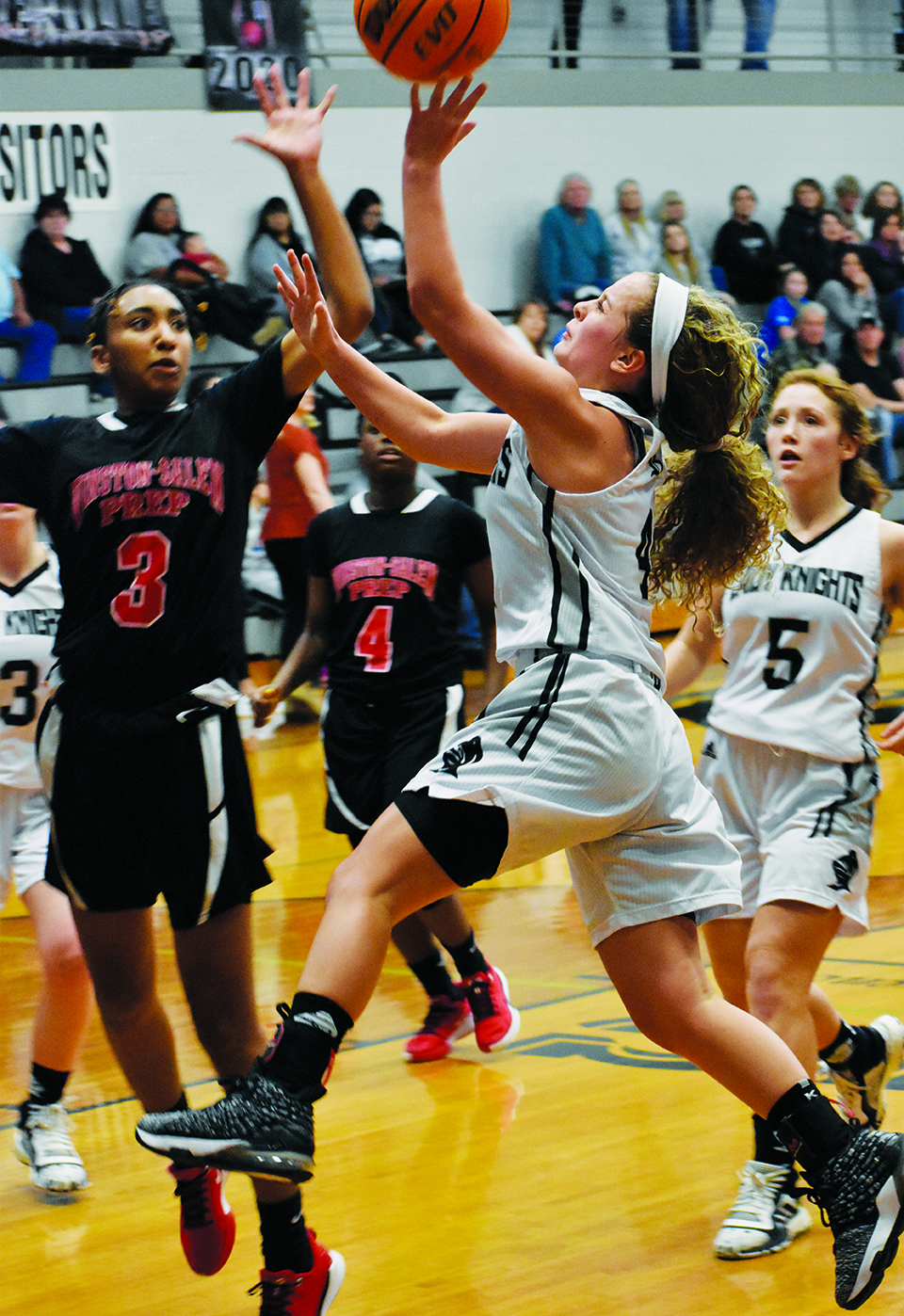 Robbinsville – It was the very definition of a “team win.”

The Robbinsville Lady Knights (No. 13 seed, 22-6) put other teams in the 1A playoff bracket on-notice Tuesday night, exploding in the second-half to topple the Winston-Salem Preparatory Academy Lady Phoenix (No. 20 seed, 10-15) in a 74-35 rout.

“This is when basketball is fun,” said Robbinsville head coach Lucas Ford after the win. “The girls had fun. They’re excited to play another day.

“When you get to the playoffs, you have to bring it every single night. If we do that, it’s a fun ride.”

Robbinsville’s Halee Anderson posted a 3-point play off the opening tip. The Lady Knights did not score again in the first quarter until a Kennedy Cable basket at the 3:30 mark, but Cable’s work off the bench – which included six points in the first quarter alone – sparked the Knights, who finished the segment ahead 14-5.

Winston-Salem Prep enjoyed some late second-quarter success from the charity stripe, cutting the Lady Knights’ lead to 28-22 at the break.

But Robbinsville came out on a tear to begin the third, going on an 8-0 run that included a pair of transition baskets.

From there, it was all Lady Knights.

In her first game back from injury, freshman point guard Desta Trammell led the crowded Knights scoreline with 15 points, one rebound, one steal and three assists.

“We studied film and we practiced for this; we knew they were going to be aggressive and scrappy,” Trammell said.

“We had to get our minds ready and we definitely did. We just had to keep our composure and it all fell into place.”

As expected, Robbinsville will now hit the road for second-round action.

And it is against the defending 1A Western Regional champion, as the East Surry Lady Cardinals (No. 4 seed, 18-5) will play host to the Lady Knights today.

No matter, says both Ford and Trammell; Robbinsville is ready for the challenge.

“We match up well with East Surry,” Ford assessed. “They lost a lot of last year’s team. If we focus on us, who we are, play our style of basketball, run the floor and play great defense, we’re not going to worry about what the other team is doing.”

“We’re ready to hit the road,” Trammell added. “We know that we can beat anybody, as long as we come to play.

“We have to be mentally prepared, because we can lose to anybody, too. We have to keep our mindset right and be ready.

Rosman – In a rare anomaly, both Robbinsville and Hayesville had to play a third-place tiebreaker Feb. 19, during the final day of the Smoky Mountain Conference tournament at Rosman.

Both the Lady Knights and the Lady Jackets ended the regular season with a 7-5 conference record and the state required a one-game playoff – so to speak – for postseason seeding.

Robbinsville sank seven shots from beyond the arc to outpace Hayesville, leading 26-16 at halftime and going on to clinch the No. 3 conference playoff seed with a 55-46 victory.