In a world where Iron Man Triathlons are simply not happening – after all, one cannot socially distance when competing alongside thousands of participants – Hodgson could not be deterred.

Initially training with Knoxville Endurance to compete in Ironman Chattanooga – the 2020 installment, scheduled for Sept. 27, was like most anything else this year: canceled – Hodgson opted to inject some local flavor into what he had worked for.

So he started training for the chilly waters and steep terrain offered by Fontana Dam. 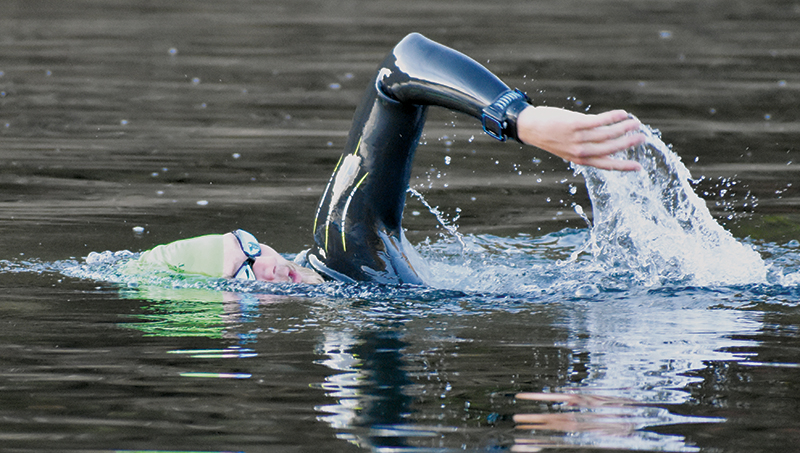 “I decided to go ahead and plan to undertake the distance in my own backyard,” Hodgson said. “This race I created has no finish line – nor other competitors, as I am not challenging anyone other than myself.

“The world of endurance sports is special in the athletic world as most participants are not extrinsically motivated by fast times or performance, but rather they take part to challenge themselves personally. Those who are willing are inspired to gain the intrinsic benefit from the transformation that occurs through intentionally taking the path of most resistance, and training for something bigger than they once thought possible.”

Everyone has their own personal motivation for wanting to climb such an arduous mountain. Hodgson is no exception.

“I have a history of struggles with addiction and poor self-esteem,” Hodgson said. “Through training in endurance sports, I sharpen my mind’s ability to be one-pointed, focused and strong in the face of discomfort. Strengthening my mind when faced with physical discomfort helps in my healing process, as this directly correlates with my ability to pierce into the emotional darkness that remains in my psyche.

“This darkness is there because of past traumas in my life and how I dealt with them to get by at the time. They are the foundation of the lower mental habits and tendencies that keep me bound in addictive cycles, and is the foundation of the negative beliefs I unconsciously hold against myself.

“However, darkness can only exist in the absence of light. Just as one wanting to look into a dark room can focus an adjustable flashlight from a broad, dim beam into a tight, strong beam of light – to see what is inside the room – so, too, the mind can become one-pointed and strong, to be able to see the unconscious mechanisms operating within the self.” 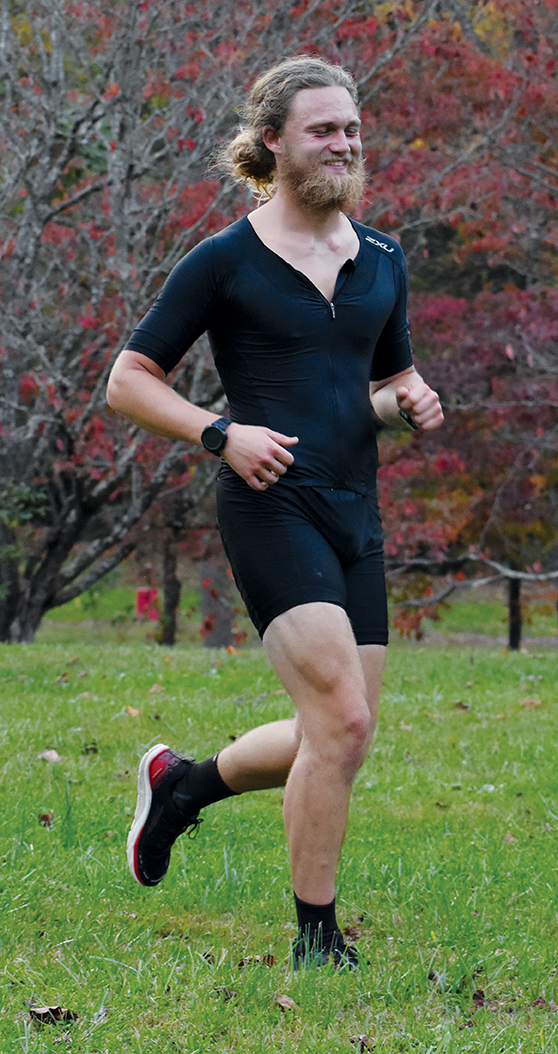 To prepare for Monday’s test, Hodgson estimates that he has logged about 2,500 miles on his bike. He has also trimmed his 800-yard freestyle time from 20 minutes to 15, and his only setback occurred in late-September. Just one week before he was originally set to complete what has been self-dubbed as the “Fontana Dam Iron Distance Challenge,” he sprained his ankle and knee.

There was no sign of those injuries Monday, as he embarked on the swimming portion at 8:09 a.m. and wrapped up the marathon on the softball field at Fontana Village at 1:18 a.m. Tuesday. Wedged between was 33 laps between the Lewellyn Branch Boat Ramp and the Orr Cemetery Access Road.

“Although this inward process is very challenging to do, I find that through the gradual training of my mind, through the training of the body, I can persistently burn away at the knot of darkness in my psyche and become more stable and less burdened in my heart,” Hodgson said. “It is my goal to build myself into the superhero of my story by continuing to train and win the small daily battles over my internal state until all the enemies  are eliminated, and the fortress ultimately falls into my hands.

“All around, (I am) feeling pretty fit (but) not a huge difference though, because I was racing last year, too. This year, I got a trainer and have been doing scheduled workouts. Last year, I was just winging it.”

When he is not busy vanquishing 140.6 miles of Fontana landscape, Hodgson’s time is split between being a member of the Fontana Dam Town Council and working at the Wildwood Grill as a bartender.

There was certainly no rest for the weary. Where was Hodgson at 8 a.m. the next morning? Southwestern Community College in Sylva, where is pursing a degree in outdoor leadership.

While most college students struggle to attend early classes, Hodgson did it after completing a 17-hour triathlon the day before.

“I just stayed focused on the task at hand,” Hodgson said after completing the challenge. “I had to make sure I was eating and staying hydrated. The sun came out during the second-half of the biking, so I got a little dehydrated and was getting a little bit of a headache.

“You just break it down into small pieces and it’s not as daunting, because it’s all done at a reality-slow pace. It did take me all day, but it’s done just one step at a time.”