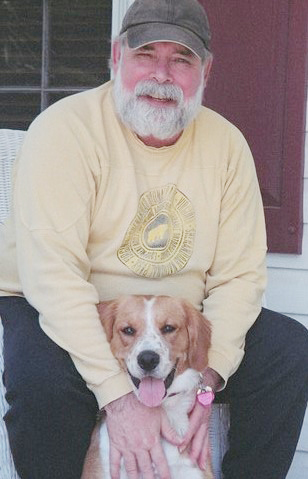 On Sunday, Jan. 19, 2020, Dennis Craig Schurr, 69, recently of Almond, N.C, slipped away peacefully at home following years struggling with illnesses, due to Agent Orange exposure during his service as an Airborne Ranger in the Army in Vietnam.

“Den” was known and loved as someone who never knew a stranger and did nothing in a small way. He was kind, jovial, generous and service-oriented. He enjoyed playing with various personas and costumes, from Victorian Father Christmas to Civil War Suttler.

He leaves behind his beloved wife Karen Lisbeth “KaeLi” (Lier) Schurr. Close friends in high school, they reconnected in 1998, and were married in 2010. Two canine companions, Comet and Bella, were a constant presence and source of comfort, especially in his final years.

Born June 24, 1950 and raised in Sidney, Ohio to John Franklin and Eileen (Bodenmiller) Schurr, he belonged to the First Baptist Church. He graduated from Sidney High School in 1968 and joined the U.S. Army in Oct. 1968, rising to the rank of Staff Sargant E-6 following Ranger School.

Beginning in Nov. 1969, Mr. Schurr served two tours in Vietnam as an 82nd Airborne Division Ranger, Long Range Patrol team leader and advisor to the South Vietnamese Army. In the first tour, he served as a Ranger instructor for K Co. 75th Infantry Rangers; in the second tour, he was a
light and heavy weapons specialist for the 52nd Vietnamese Ranger Battalion. He was a two-time recipient of the Bronze Star.

While living in Pittsburgh, he was involved in fund raising drives for WQED-TV (PBS)/WQED-FM (NPR). He also bicycled cross country with “Wandering Wheels” completing two of three coast-to-coast across America rides.

He moved to North Carolina in 1999 and lived at the Outer Banks from 2000 to 2016. He spent the last three years living in Almond, N.C. in the mountains of far western North Carolina.

An interest in antiques led to a passion for Civil War history. He became a recognized expert to researchers, authors, museums and collectors. One of his major accomplishments was serving as an expert witness to facilitate the return to Brown University (Rhode Island) of a stolen Civil War sword of Col. Rush Hawkins that he had discovered.

Mr. Schurr was also instrumental in planning and presenting “Flags Over Hatteras,” a week of events in 2011-12 recognizing important North Carolina Civil War history under auspices of the Friends of the Graveyard of the Atlantic Museum on Hatteras Island, during the nation’s Sesquicentennial of the Civil War. A descendants’ reunion conference – with nationally-known historians and exhibition that he co-curated – were largely funded by an auction that he envisioned and orchestrated.

He is survived by brothers J. Douglas Schurr (Cindy) of Crossville, Tenn. and Mark S. Schurr of Sidney, Ohio; and a sister, Cheryl Schurr Byars (Michael) of London, Ohio.

A celebration of life will be held in Ohio at a later date. Funeral and interment will be at Arlington National Cemetery.

Townson-Smith Funeral Home was honored to be serving the Schurr family.