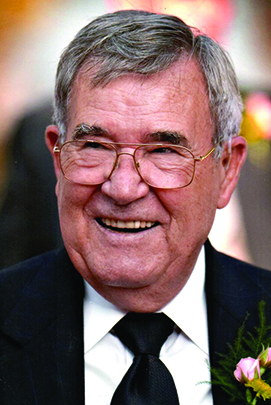 A native of Florida and resident of Lakeland, Fla. He was born Nov. 21, 1926 in Graceville, Fla. to the late A.B. Richter and Mae Bell Hughes Richter.

In addition to his parents, he was preceded in death by his son, Randolph “Randy” Thomas Richter; brothers, Herman E. and A.B. Richter, Jr.; and sister, Frances Richter Starnes.

He proudly served his country in the U.S. Navy during World War II in the North Atlantic and Europe as the ship barber. He also served from 1952 to 1962 in the NAVSEC GRP for a total of 18 ½ years.

He held a single engine private aircraft license. He retired after 41 years from Mobil Mining and Minerals. After retirement, he formed a consultant company and worked for three years.

Roscoe was a member of AIME and SME for over 60 years, past member of Fairmont Baptist, Medulla Baptist, Edgewood Baptist, Lakeside Baptist and most recently served at Scott Lake Baptist Church.

He was born into the Church of Jesus Christ in 1949 at Fairmont Baptist Church, High Point, N.C. He was baptized in a lake in early April, due to the church being burned down shortly after accepting Christ.

In lieu of flowers, donations may be made to the Scott Lake Baptist Building Fund, or the Mission of the Columbia Church, 5811 Scott Lake Road, Lakeland, Fla., 33813.