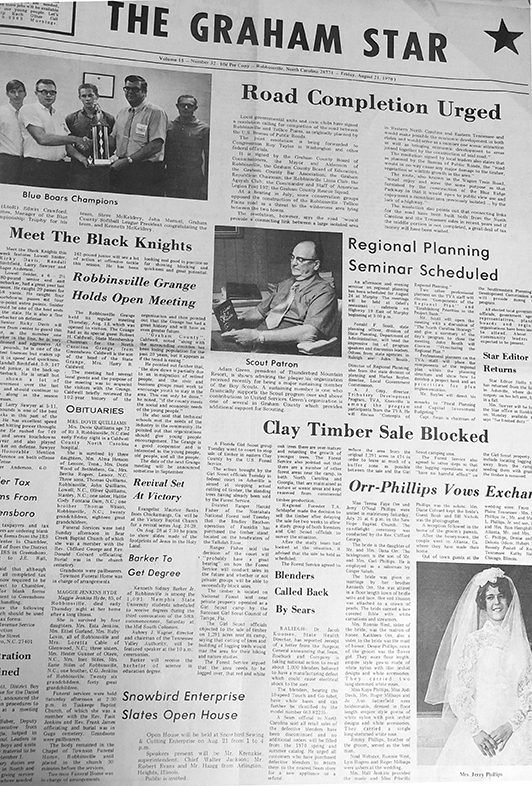 * Despite efforts to save the old forest service headquarters on Massey Branch Road, the building burned to the ground on Aug. 19. Firefighters from Snowbird, Santeetlah, Robbinsville and the Graham County Rescue Squad rushed to the aid of the building that was constructed in 1962. Attempts were made to save the building for a county logging museum or visitors’ center, but the costs to do so were too high for county finances.

* Returning football players of the Knights have a high standard to meet when coming back from last year’s 11-3 season. On top of doubts the team has, the players must also listen to the community voice those same doubts. The Knights silenced many of those doubts at a scrimmage at Western Carolina University.

* Three 14-year old girls went missing from a foster home in Robbinsville. The girls were Oanya Sawyer, Amber Nichol, and Mae McWorter. The girls escaped from a second floor during the wee hours of the morning by tying sheets together and lowering themselves to the ground. The girls were found a week later, less than 24 hours after their disappearance was reported to authorities. Two turned themselves in to
officers on Aug. 16, and the third was picked up walking along a road later that same day. The three were bruised and scratched, but otherwise unharmed.

* Fontana Village Resort in Fontana Dam hosted athletes from all over the eastern U.S. to compete in the inaugural running of the DoLaLee, the official National Off-Road Bicycling Associations Appalachian Championships. The one that conquers the 9-mile race course would receive a combined purse of over $25,000.

* A Florida Girl Scout group went to court to stop the sale of timber in eastern Clay County by the U.S. Forest Service. The Bradley Brothers operation of Franklin had purchased the timber stand, located on National Forest Service land near private property operated as a Girl Scout camp by the Suncoast Girl Scout Council of Tampa, Fla. Girl Scout officials objected to the sale of timber, claiming that the cutting of trees would mar their hiking trails and nature studies. The Forest Service argued that the red and white oak trees were over-mature and hindering the growth of younger trees. To appease both groups, the Forest Service agreed to reduce the area of timber “cutting” from 1,291 acres to 474 acres, and to take additional steps to ensure the logging would have no harmful effect on the Girl Scout property.

* The initial Far West District Slow Pitch softball tournament for women was set to begin. A total of 11 teams have entered and at least 20 games will have been played before the 1970 District Champion is determined. There will be tough competition from strong teams such as: American Thread, Martins Creek, Palmer Carpets, Warne and Dents Cafe at Bryson City.