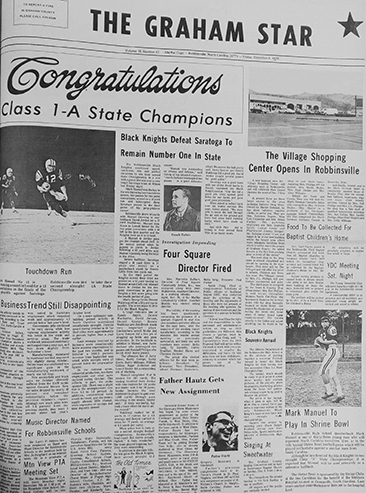 * Criminal charges against the grandmother and mother of a toddler that was mauled by a pack of pit bulls were considered by the grand jury. There was no disclosure of any charges against Susie Anderson, grandmother of the two-year-old, nor the mother, Vanessa Smith. As of press time, officials were uncertain when the outcome would be known. The toddler was mauled by five of his grandmothers’ pitbulls, while the child was outside by himself at the time of the attack. 911 was called by a passing motorist.

* It was a two-year ride for the young middle school basketball players. After completing the first half of their season with a 36-27 win at Hayesville, the Knights appeared to be well on their way to another undefeated season. The Knights took an easy 52-27 win over the Cherokee Braves, led by guard Zane Wachacha with 19 points and Skyler Matheson adding 12 points to aid in the victory.

* Robbinsville sixth-graders tied for the best test scores in North Carolina. The county’s eighth-graders tied for third place. Writing assessment tests showed that Graham County students in sixth and eighth grades did well in reading, comprehending and using English grammar. Fourth-grade students were tested at the same time and tied for 11th place. Assistant Superintendent Rick Davis stated, “These scores reflect a great accomplishment for our schools. The students, teachers, parents and community can be very proud of these writing scores.”

* The wrestling team started with the team members holding a “camp” at coach Ritchie Trammell’s home and at the Robbinsville High School gymnasium. Once the doors were shut, the guys wrestled, set team goals and stayed inside until Sunday morning, as they went to church together. Trammell believed the camp raised the teams unity. The team began a season with fewer wrestlers and younger guys, but Trammell believed that there were several wrestlers who seemed to have what it takes to become state champions.

* A new business area, the Village Shopping Center, held its grand opening. There were only three large stores in the area, including Delozier Drug Store, owned by Martin Delozier. The pharmacist was Jimmy Hooper. The next store was The Villager and offered infants, children, teenage wear, gifts and accessories. The third store was the Town and Country Shop, whose owner was Mrs. Ted Phillips. She enjoyed the distinction of having the latest and finest stock of better brand name ready-to-wear clothing, catering strictly to the ladies.

* The Robbinsville Black Knights combined speed, quickness, size and perfect execution to win their second state championship in a row, with a 28-6 win over a very tough Saratoga team. Mark Manuel was the key to the win by throwing two touchdown passes, scoring on a 13-yard run and intercepting three Saratoga passes in the final game of his gridiron career. In addition to the state title, the win gave the Black Knights their second straight 11-2 season.