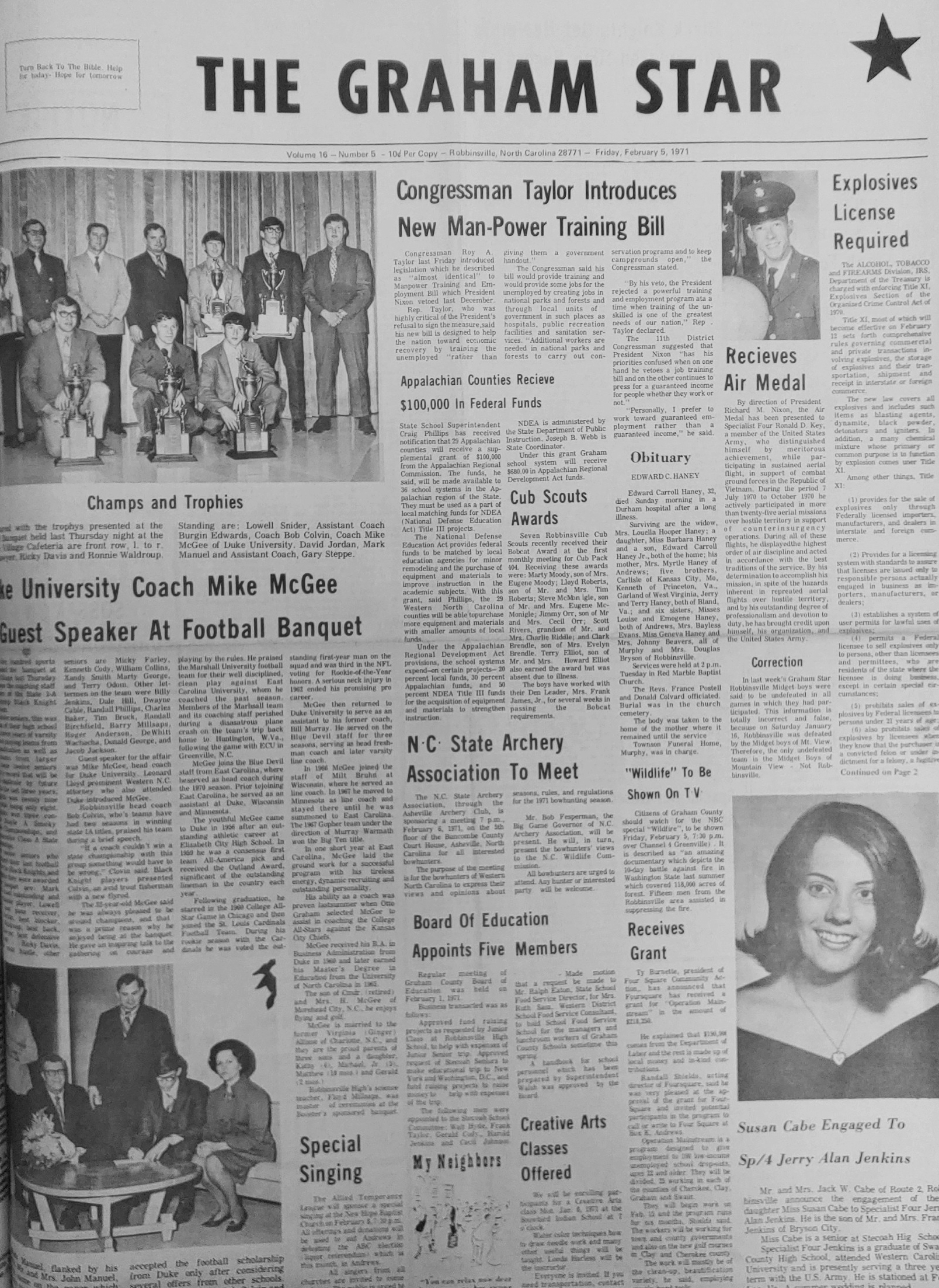 * The annual Polar Bear Plunge – held at Lake Santeetlah – raised more than $8,200 dollars. The plunge was coordinated by the Robbinsville High School Crusaders, and the money that was raised was used to sponsor a child from the Make-A-Wish Foundation. Nancy Orr and Ashley Postell won the Golden Plunger Award for raising the most money.

* Local pool-shark Wade Crane left behind a powerful legacy for future generations. Crane’s remarkable life was cut short when he was killed in a car crash in Knoxville. He was the instructional journalist for Pool and Billiards Magazine, providing guidance in his monthly article, “Cranes’ Winning Way.” He also won many awards, but regardless of his fame and fortune, his family and friends remember him as just “Wade.”

* Graham County saw a decline in its drop-out rates for the 1994-95 school year. In figures released by the N.C. Department of Public Schools, Graham County went from 7.22 percent to 4.88 percent, meaning 45 dropouts to 29. Although pleased with the good news, Graham County Superintendent Lowell Crisp said, “We expect that the upcoming year will more than likely increase in drop-outs, due to stricter attendance regulations put in place by Graham County School Board.”

* Robbinsville’s wrestlers were undefeated in conference matches for the first time in school history. The Knights won every head-to-head match against Swain. Without a doubt, the fans played a major part in these wins. “We appreciate them (the fans) and hope we can give them something to keep coming back for,” said coach Ritchie Trammell.

* Congressman Taylor introduced a new Man-Power Training Bill, which would provide training and jobs for the unemployed. It would create jobs in National Parks and Forests, as well as hospitals, public recreational facilities and sanitation services. “Personally, I prefer to work more toward guaranteed employment than toward guaranteed income,” Taylor said.

* The Black Knights got nearer to an all-time record, as they faced a four-corner offense by Nantahala. They came out on top with a 47-30 win – and against Hayesville, with a 60-55 win. The win over the Jackets was Robbinsville’s 11th conference win. The Knights were only three games away from breaking the school’s regular season record of 18-2, as they were 16-1 overall and 11-0 in the Western Division of the Smoky Mountain Conference.