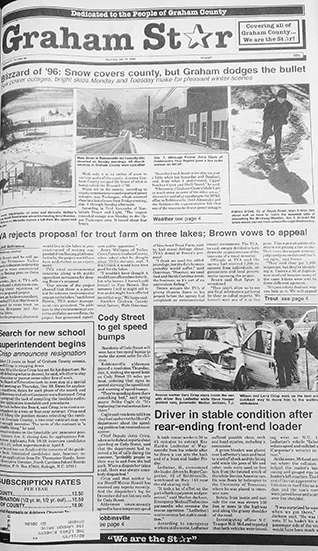 * Graham County Emergency Officials declared a county “state of emergency,” in the wake of the third major snowstorm to hit Robbinsville. The storm slammed the county with 10-16 inches of snow, forcing businesses, schools and county government to close. Larry Hembree, Director of Graham County Emergency Management Agency, said that a curfew was imposed, but no major incidents were reported.

* The Knights struggled to get back on track after falling to a 3-8 record, following a 73-50 loss to Hiwassee Dam. It was a bitter pill to swallow for a team who knocked conference-leader Hayesville off just a week before.

* A driver was in stable condition after rear-ending a front-end loader. It took rescue workers 45 minutes to extract Roy Hardin Ledbetter of Waynesville from his vehicle after he drove a van into the back of a front-end loader. “It took a lot of effort on the part of both, equipment and personnel,” said Marlon Jackson, Emergency Medical Technician Paramedic. Ledbetter was in serious, but stable condition,

* Pam Beasley’s 12 points in the fourth quarter against Hiwassee Dam left the Lady Knights shy of a win. The game started out slow, but even the second-half showed much improvement, ”But it seemed to be too late,” said coach Melissa Caldwell.

* A Graham Star for 50 years ago could not be located.