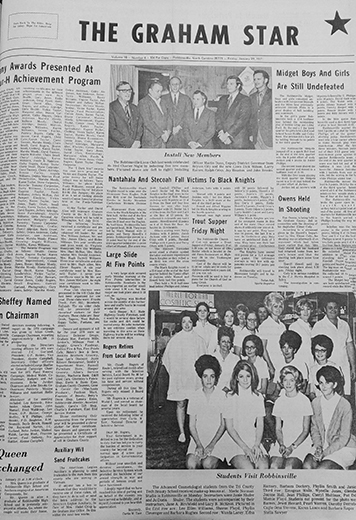 * Robbinsville officials were desperately searching for $3 million, in addition to the $3 million already awarded by the Rural Development division of the U.S. Department of Agriculture for the new wastewater treatment plant on Sandhole Road. The additional price tag is in place for future development, as the town would like to have a large-enough facility to handle the demand for the foreseeable future.

* The Robbinsville Knights won their first game since the Christmas tournament in Nantahala and continued with a 54-30 win over Andrews. They also did it without their normal starting five players. Robbinsville took the lead early on with back-to-back 3-pointers from Dylan Rogers. The Knights never looked back.

* The Robbinsville High School Alumni were ready to play some football, as sign-ups were held for the second annual alumni football game. In order to sign up, each player went to the Family Fun Center and paid $15 for a jersey and equipment. They signed a liability waiver form, as well as listed their graduation date and preferred jersey number. The game was set to be held in May.

* Nantahala and Stecoah fell victim to the Black Knights’ basketball team. Robbinsville raced to a 75-50 win over the Hiwassee Dam Eagles and a 55-40 triumph over the Nantahala Hawks. The win over Nantahala was led by Mark Manuel with 13 points and Terry Howell’s eight points. The Knights rolled onto an 85-41 win over the cross-county rivals.