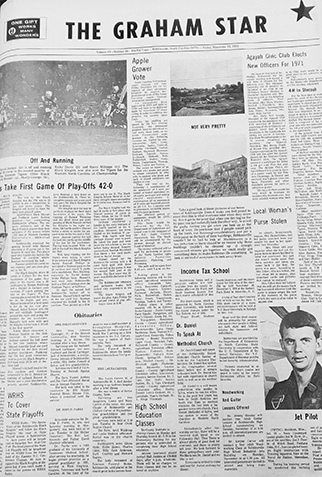 * November was proclaimed American Indian Heritage month by N.C. Governor Beverly Perdue. Several events were planned by Graham County Schools Indian Education Director Marcia Hollifield. Chief Hicks was on-hand to provide the welcome. The celebration began with the 100th anniversary celebration of the Junaluska’s Wreath-Laying. Because of the 100th anniversary, a bigger-than-normal celebration was held at Junaluska’s grave site.

* Chris Daniels scored four touchdowns in the first quarter and had a career high of 30 points, to help boost the Knights to a 63-13 conference win over Cherokee Braves.

* In a note to a city employee, Bishop Holder resigned as Mayor of Robbinsville. Holder’s duties for Bennett Manufacturing have kept him out of town, limiting his Robbinsville presence and his ability to fulfill his duties as mayor. Aldermen were still uncertain of how to fill the vacant position, whether it be by an acting alderman or by appointing someone not in office to be mayor for the remainder of the term.

* Robbinsville’s Black Knights ended the season on a winning note, defeating Cherokee Braves 31-19. The scoring was opened on a 26-yard touchdown, run by quarterback Brian Gross. The Knights finished their season at 2-8, but showed much improvement over the last half of the season.

* Navy Lieutenant Joe W. Dyer, Jr., son of Mr. and Mrs. Joe J. Dyer Sr. of Welch Road in Fontana Dam, had completed flight instruction with Training Squadron Nine at the Naval Air Station in Meridian, Miss. He mastered the techniques of jet acrobatics and night-formation flying. He also received some 48 hours of flight experience in the North American T-2 “Buckeye” jet training aircraft. Further training will be at the Naval Air Station in Pensacola, Fla. in air-to-air gunnery.

* The Robbinsville Knights took the first game of the playoffs against Rosman, 42-0. The win by the Knights was the 17th in 18 games in 1-A competition in the last three years. The Robbinsville offensive and defensive teams both looked very impressive in the victory. The Knights will travel to Apex for the second round of playoffs.