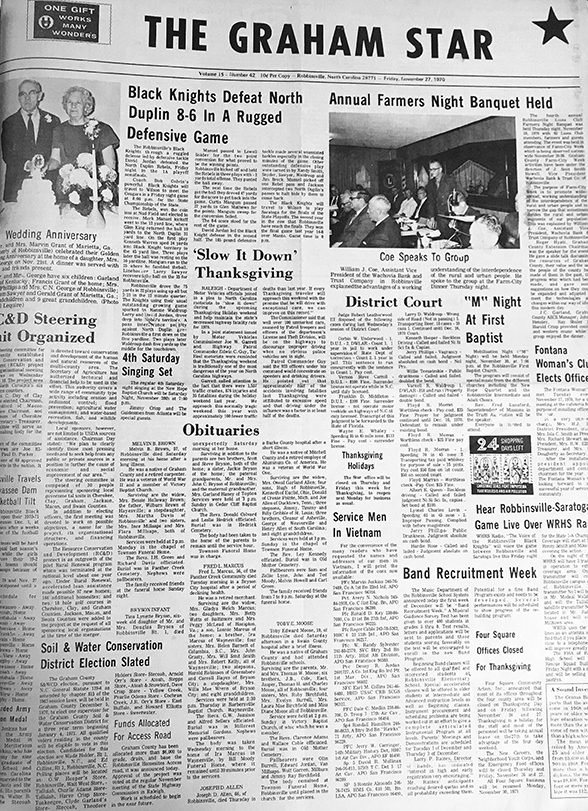 * One hundred and fifty hemlocks were blasted with explosives inside the Joyce Kilmer Forest. The trees had become a safety hazard to the approximately-35,000 visitors that come to the forest each year. The hemlocks were infested with the hemlock woolly adelgid, an insect that feeds on the sap of the tree. The trees began dying at a rapid pace, despite efforts by forest service crews to save them. The infected trees were estimated to be between 150-300 years old.

* Robbinsville beat the Elkin Elks 42-7 at Big Oaks Stadium, to advance to the third round of playoffs. It was the third-straight year Robbinsville and Elkin had met in the postseason. The Knights were set to travel to Murphy for the next round.

* Renovations and a long-term relationship were promised by Fontana’s new manager, Bob Maxbauer. A general contractor, heating and air contractor, and pilot, Maxbauer saw the restoration of Fontana Village tied with lives of people of Graham County, who gave a unique atmosphere to Fontana Village.

* Navy Airman Samuel J. Whitson – a 1991 graduate of Robbinsville – returned to Lemoore, Calif. after completing a six-month overseas deployment with Strike Fighter Squadron 22. Whitson was one of 238 squadron members aboard the ship who completed more than a 38,000-mile voyage. Whitson’s unit was part of the USS Abraham Lincoln Battle Group, which included more than 80 tactical aircrafts. Whitson joined the Navy in August 1993.

* Department of Motor Vehicle officials joined in a plea to North Carolina motorists to slow down during the upcoming Thanksgiving holiday weekend. The statement was issued by Motor Vehicles Commissioner Joe W. Garrett and Highway Patrol Commander Edwin C. Guy. The Thanksgiving weekend was traditionally one of the most dangerous of the year on state highways.

* The Robbinsville Black Knights – led by defense tackle David Jordon – defeated the North Duplin Rebels 8-6 in the 1A playoff semifinals. Coach Bob Colvin’s Black Knights were prepared to travel to Wilson, to play the Cougars for the state championship.