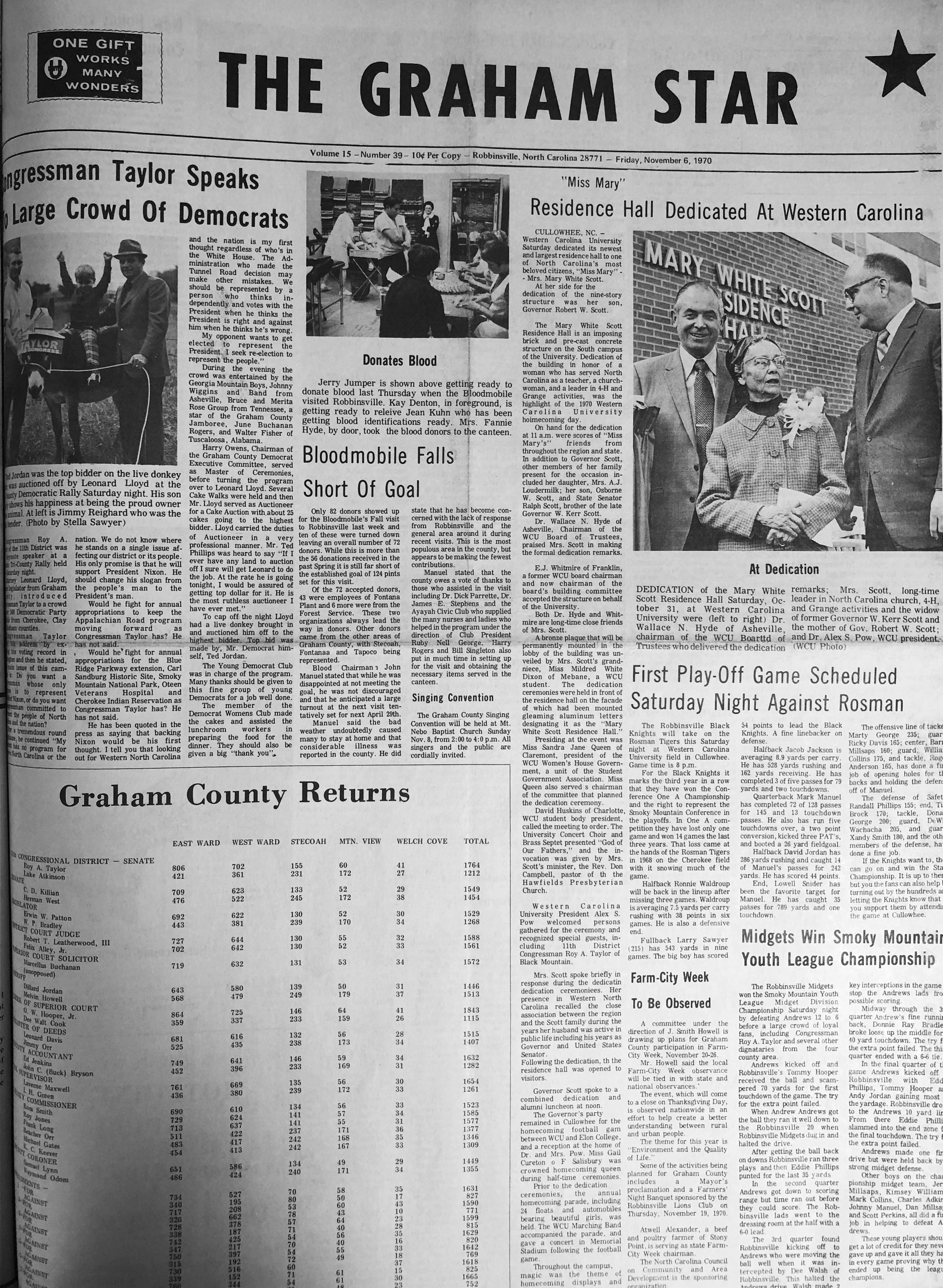 * Democrat Mickey Anderson was elected Graham County Sheriff, winning by less than 100 votes over incumbent Russell Moody. “It has been a close couple of races between us, and I appreciate the clean campaign Russell has always run,” Anderson said. “I will be the best sheriff that I can be for the county regardless of anyone’s political ties. I will be a sheriff for everyone.” Anderson, who was celebrating his birthday on Election Day, said he will keep the fight against drugs as one of his top priorities.

* The Black Knights had a superior performance last Saturday at the regional cross-country meet in Hendersonville. Not only did the boys win their first regional championship, they also set a new record for the lowest points scored at a regional meet. In addition, Lady Knight Tacey Trammell blistered her competition and set a new course record of 19:16.68. Her time beat the old record by more than 30 seconds.

* The State Bureau of Investigation was investigating the disappearance of a Graham County jail inmate, Paul Schmitz. Schmitz was awaiting trial on charges of possession of stolen goods, forgery and uttering when he escaped from jail. Schmitz, who escaped without using force, was arrested by police in Erie, Pa. on charges of breaking and entering between 3-3:30 a.m. Nov. 1.

* Robbinsville went to Avery County Friday to take on the 2A Vikings. The Knights took the lead 8-7 to end the first quarter. Avery came back to score on a 3-yard run, in which the Knights answered by returning the kickoff for a touchdown. Avery then scored on an 18-yard pass with 50 seconds left in the half to bring the score to 21-14 in favor of the Vikings. In the third quarter, Avery expanded the lead 31-17 with a touchdown pass. The final score was 31-23, Vikings.

* Only 82 donors showed up for the bloodmobile’s Fall visit to Robbinsville and 10 of those were turned down, leaving an overall number of 72 donors. While this is more than the 56 donations received in the Spring, it is still far short of the established goal of 124 pints set for the visit. Donors came from Fontana, Stecoah and Tapoco.

* The Knights won the Smoky Mountain Youth Football League Midget Division Championship, by defeating Andrews 12-6 before a large crowd of loyal fans, including Congressman Roy A. Taylor and several other dignitaries from the four-county area.