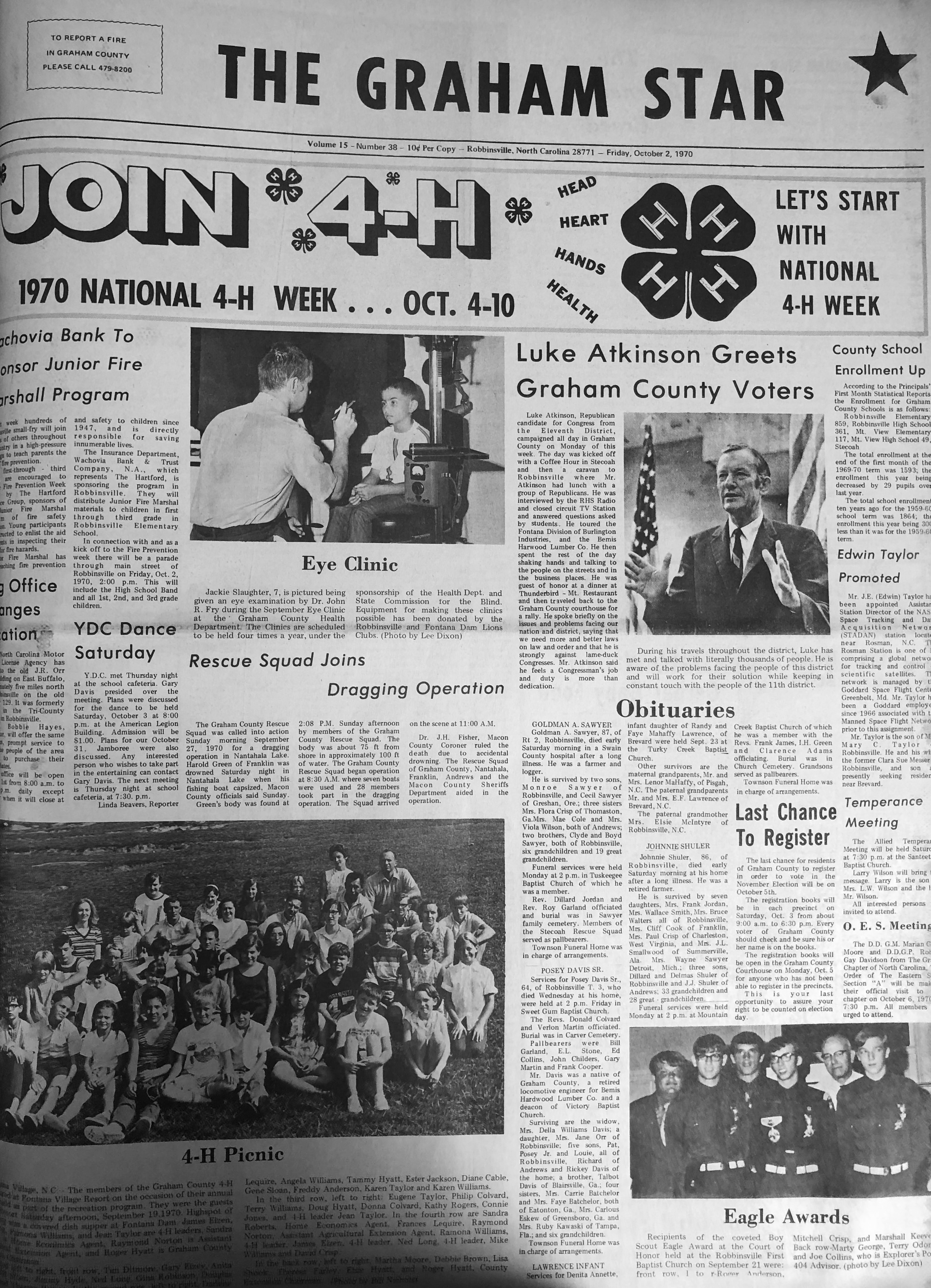 * Graham County Department of Social Services was immediately called by officers that arrived at the home of Garrell “Tick” Orr on Long Branch Road, when they found a seriously injured 3-year-old child with bruising around the facial area. The child was removed from the domestic situation of Orr and his daughter-in-law, Lora Cunningham. Graham County Sheriff Russell Moody said both adults gave contradictory stories of the conflict. After conducting an in-depth investigation and talking with several family members, both Orr and Cunningham were arrested and charged with felony child abuse with serious injury. They were held on $5,000 bonds, with court appearances scheduled later in the month.

* Black Knight fans couldn’t have asked for a better start to the conference season than the 25-0 shutout win over Swain County. The Knights offense may have won the game, but it was the stout defense that kept the Devils out of the end zone. This was the third consecutive year Robbinsville has derailed the Maroon Machine with shutout wins. The Knights had outscored the Devils 106-0 in the three-year span.

* James Crisp and Casey Nichols grew an abundant crop of large pumpkins, candy-roasters and watermelons at the old Crisp homeplace on Jack Branch. The largest pumpkin weighed 200 pounds, with several more weighing 100 pounds. The pumpkins are the Giant Atlantic Variety and were purchased from Gurney Seed Company. The patch was planted in May and matured in about six weeks.

* The junior varsity Black Knights won their first game against Enka, 26-20. Sterling Crisp led the effort with two touchdowns for Robbinsville. Thomas Berger and Aaron Gross scored one touchdown each.

* Luke Atkinson – Republican candidate for Congress from the 11th District – campaigned all day in Graham County. The day was kicked off with a coffee hour in Stecoah and then a caravan to Robbinsville. He was interviewed by the Robbinsville High School Radio and Closed-Circuit television station. He toured the Fontana Division of Burlington Industries, and the Bemis Hardwood Lumber Company. He was Guest of Honor at Thunderbird Mountain Restaurant and then traveled back to the Graham County Courthouse for a rally. He then spent the rest of the day shaking hands and talking to the people on the streets, and visiting places.

* The Black Knights staged one of the greatest comeback victories ever seen in this part of the state last Friday night on their home field. They were down 28-14 early in the third quarter, when they came back to life after a sluggish first half to stomp the Sylva-Webster Golden Eagles, 58-28. The comeback began when Ronnie Waldroup broke a tackle and returned a kickoff 60 yards for a touchdown.