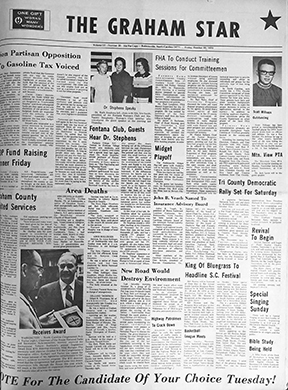 * Graham County Board of Elections Director Susan Farley says 6,557 voters are eligible to vote in Tuesday’s general election. Farley said 785 voters have participated in one-step early voting and 122 mail-out absentees have been sent. Update: The 2020 early-voting process had already brought 2,384 of the county’s 6,027 registered voters to the polls.

* After losing in four sets to Murphy in the conference tournament, the Lady Knights volleyball team traveled to Hiwassee Dam Saturday to face the Lady Eagles. Fans were nervous when the Eagles took the first win 25-23, but the Lady Knights quickly got back into the swing of things and won the next three sets: 25-13, 25-20, and 25-15.

* Mayor Bishop Holder virtually abandoned Robbinsville. “Holder has a job with Bennett Manufacturing; the job involves a lot of travel,” said Bobby Cagle, Jr., then-acting mayor of Robbinsville. “By law, the city can do nothing to change the situation unless Holder moves out of city limits. There is currently no city charter which would allow for a recall or an impeachment of the mayor. We have good personnel and the personnel; they just took up the slack. You can’t even really tell he’s gone,” Cagle said.

* The Black Knights went to Hayesville as 12-point underdogs, but came away with their first win of the season in a thriller as Josh Holloway kicked a 12-yard field goal with 20 seconds left for a 15-14 win. The victory was a great step for the young team.

* Approximately 119 conservationists met at the Joyce Kilmer parking area to protest the routing of the Tellico/Robbinsville Road through the upper portion of Joyce Kilmer and Slickrock. The group objected to the routing of the road, pointing out that this was one of the last watersheds remaining in the Appalachians where the forest had not been disturbed. As an alternate, the Conservationists proposed the road be routed up Big Santeetlah Creek.

* Robbinsville beat the Andrews Wildcats, 36-14. The Black Knights played a great game. Mark Manuel picked the Andrews secondary apart. David Jordan – a transfer from Andrews – ran all over the Wildcats on offense. Jacob Jackson proved hard to stop, running in a 16-yard touchdown and a two-point conversion.