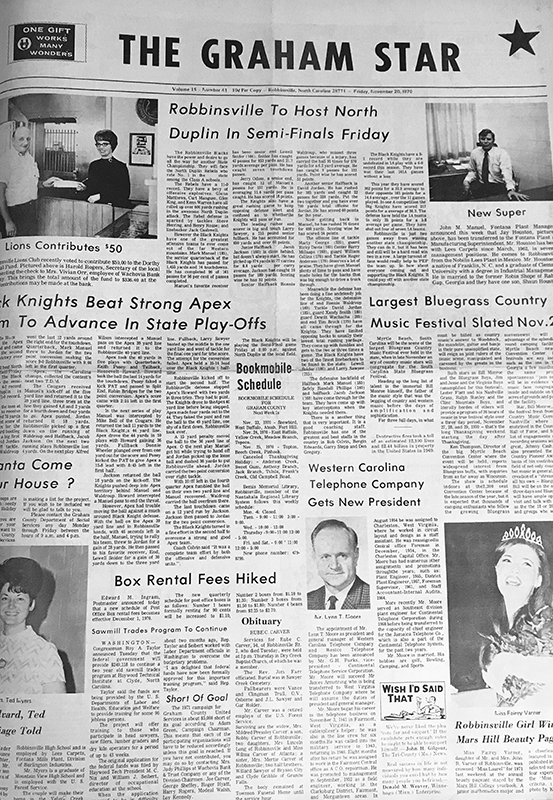 * An estimated 150 visitors gathered at Junaluska’s grave site to commemorate the 100th anniversary of the Wreath Laying ceremony. The great-granddaughter of Chief Junaluska – 94-year-old Martha Taylor – was honored by the N.C. Honor Guard as they presented a flag. When the project began, there was only 15 ladies in the Daughters’ of the American Revolution. A boulder was selected as a monument in 1908, supposedly using something native to the land that could represent the strength of the chief. The people remembered Chief Junaluska for his leadership and care of his people.

* The middle school Knights’ basketball teams played like they had never left the gym. Both teams shut down Swain. The Lady Knights won 38-16, while the Knights ended the game with a 45-24 win. The Lady Knights were led by Rebecca Teesateskie with 10 points. The Knights – led by Zane Wachacha with 20 points – improved to 3-0 with their win over the Devils.

* One of several emotional moments during Robbinsville High School’s Veteran’s Day observance were songs played for each branch of the Armed Services by the Black Knight’s Band. Each young man from Graham County who was killed in war was named and remembered. Two young men that attended Robbinsville High School – Brian Stevens and Jason Stewart – were named as having enlisted to join the Armed Forces.

* Stecoah Township Rescue Squad and Fire Department held its annual mud sling and tug-of-war at the lake bed in Wolf Creek. Eight-year-old Amy Needon won a $50 prize for the run in the mud after the truck competitions were over.

* Miss Fairey Varner, daughter of Mr. And Mrs. John R. Varner of Robbinsville, was crowned “Miss Laurel” for 1971, at the annual beauty pageant staged by the Mars Hill College yearbook. She was selected out of 14 contestants by four experienced judges using the “Miss America” judging criteria.

* The Robbinsville Black Knights spotted the Apex Cougars a 15-14 lead in the quarterfinals of the 1A state playoffs, but came storming back in the second half to take a 36-15 victory. The Knights (9-2) were set to host the North Duplin Rebels (11-0) in the semifinals.